Problem:
How can we distinguish between a Node which Never Up and a Node which Never Down?
In both Scenarios, No outage has been Made.
I’m trying to get the Up and Down Status of Node based on Outages table Data but on adding a Node that doesn’t exist does not create any kind of Outage. So how can I know it’s Down? or Never get Up in its Life.

Expected outcome:
[Explain what you are trying to achieve]

Can you provide some more details on what you are looking for or what you want to do with the result?

I was looking for an API that gives every node its details including its up and down status?
Eg. this node API </nodes/{id}/ipinterfaces> gives a response isdown true or false but it’s for only checking a single node at a time. I want to check all nodes with isdown parameter in response.
Is it possible to check?

Did you look at the outages endpoint?
https://docs.opennms.com/horizon/30/development/rest/outages.html

There’s not one call that is going to provide exactly what you are looking for.

Actually, Outages APIs are not helpful as I observed when a node is added in OpenNMS if it’s down or even if doesn’t exist physically.
No Outages were formed for that node.

Outages are based on Pollerd checks. If it’s down when added, an outage may not be created until it’s been detected as up once.

Can you pls tell me there is a column in the Node table named ‘nodesysoid’.
If a node were never detected as Up its value will always be NULL.

The columns of the node table: 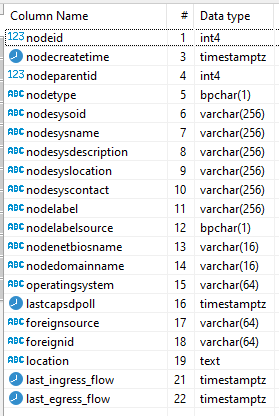 There is a nodesysoid column, however the absence of a value there doesn’t necessarily mean a node is down, it just means that SNMP hasn’t been configued or is not available for the node. ICMP may be up and getting ping responses.

Can you pls help me to figure out the Up and Down Nodes in the OpenNMS?
Is there any API available?
Or any specific table which captures the nodes up and down?